With last nights’ Warriors win, we see some interesting trends that question that pattern.

But first, let’s take a look at how the Raptors players fared during their loss.

This week we’re getting more granular than the ‘before and after’ plots of last week. Each dot on these plots represents the average sentiment score expressed in tweets that we sampled in a one-minute period that mentioned that player or coach. As the pattern ‘focuses’ or ‘diffuses’, that’s more representative of having more tweets at that time (focusing) or fewer tweets (diffusing).

That’s because calculating an unbiased statistic (like the mean of a sample as an estimate for the mean of a population) on a larger number of data points means that as you approach infinite data, you approach a true approximation of the population from which you are sampling. Cool.

We see that happening here with tweets about Andre Iguodala, which come into focus and rise in sentiment to very high average levels over the course of the game and into the night.

To demonstrate the issue of focusing and diffusion as mentioned above, let’s look at the number of tweets about ‘Andre Iguodala’ we sampled at each minute as well: 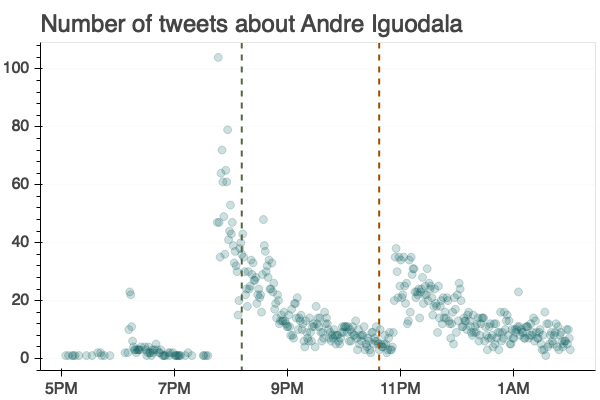 We can see that in those minutes right before the start of the game and right after the game when Iguodala was mentioned the most, our sentiment band is at its most focused. In both of those moments, his sentiment scores took a little jump as well and then held on for the rest of the evening.

We see something similar in sentiment associated with Klay Thompson: 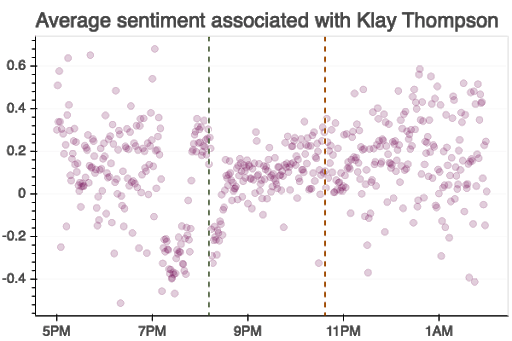 See that sudden sharp rise from the start of the game to about 9PM in a sharp line? That’s also where we see a peak in the number of tweets associated with him: 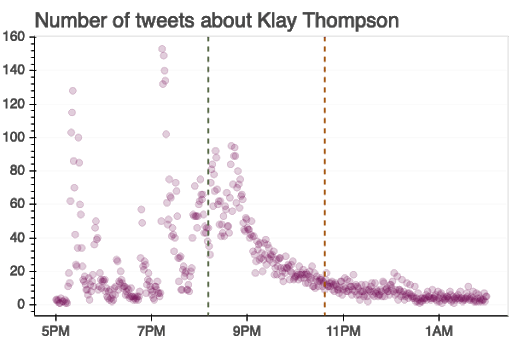 It’s also interesting to see that oscillation of negative to positive about him just before game time. It’s possible that some negative commentary broke out about him, which triggered a bunch of responses in his defense, and then that back and forth continued. That could explain those oscillations along with spikes in the number of tweets we see about him at those times.

But those moments of focus don’t always correspond to a lift. Here on Quinn Cook’s plot, we see a sudden tightening of focus a little after 7PM Eastern, before the game even started. In that case, it focuses as a dip. 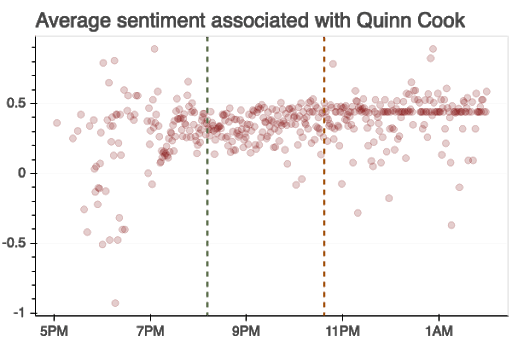 Nevertheless, over the course of the game, we see sentiment around Cook pretty high.

Overall, it looks like Warriors fans were popping with positivity for various players throughout the game, and as they received a lift in sentiment, they tended to stay there.

That corresponded to a huge surge in tweets we sampled right at that time that was associated with him:

So while the last game we saw not much change for the winner and a big drop in sentiment for the losing team, in game #2 we didn’t see much of a drop or movement in the Raptors fans’ overall sentiment, with only a slight dip during their very lackluster third quarter. We can see in this overall plot below, but we did see an upswing in sentiment around certain Warriors players as shown above. 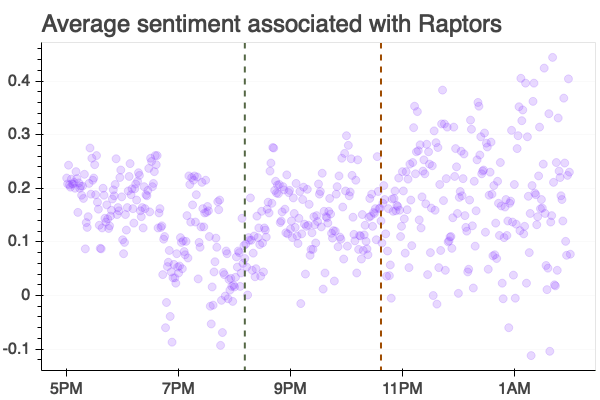 Perhaps this results from each team now having one win behind them, and everyone is feeling pretty optimistic heading into Game 3 on Wednesday.