To wrap up the NBA Twitter Text Analysis series, we wanted to recap and review the tweets that were made during the NBA Championship series.

During Game 6, we recorded 1,506,129 tweets for a span of about 13 hours. We wanted to capture the tweets before, during, and after the game on both sides of the coast and conversations that happened way into the night as well. If you want to learn more about how we created the dataset using Google Cloud Platform(GCP) tools, it is explained in Game 4 of our NBA series.

Throughout the series, we learned a lot about the best ways to process tweets relatively quickly including:

To close out our Twitter Text Analysis series, we decided to focus on:

There was a huge rise in tweet volume before the game, stayed at around 40,000 tweets and then it started to taper down as time passed.

In preparation for analysis, the text was removed of punctuation, special characters, lowercase, and stemmed to keep only the root words.

We were able to pull out an overwhelming amount of positive words used rather than negative.  People are most likely very happy for the Toronto Raptors for their win and the people that are negative are most likely a small minority of people who rooted for the Warriors. 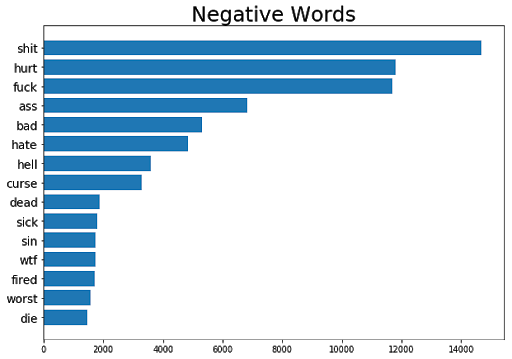 There is a huge use of the word ‘shit’ is from tweets like this:  “You see that shit? Yeah don’t do that tomorrow.”

The word ‘hurt’ came from a lot of tweets such as this:

And just commenting on how the players are hurt:

RT @LucasJHann: Imagine the audacity, the game after you rushed KD back and he got hurt again, to say “we don’t want to give the raptors tw…

Mark Jackson: I don’t like this Warriors team on the floor defensively.

Who else you want them to play?

God please give the warriors strength 😩 they hurtin out there

The interesting word that came on top was ‘free’. A look at the dataset and this was this tweet: 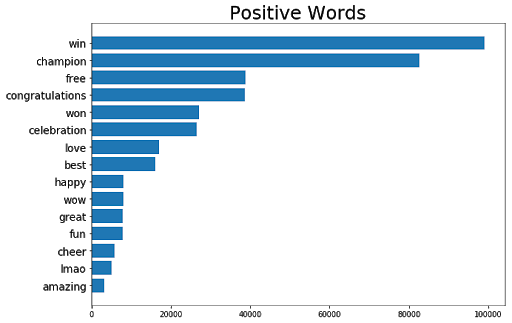 NER from Spacy has the ability to pull out important things such as people, places, and names of organizations. For a full list of them, you can find it here.

Here are a few examples:

Here is a list of the top 10 entities found:

Obviously, there would be a lot of talk about Toronto’s star players such as Kawhi Leonard and Kyle Lowry, but the injury that Klay Thompson suffered must have created a lot of talk as well. The word “first” was used a lot, probably because this was Toronto’s first championship. As you can see Warriors are featured on the bottom since looks like most people didn’t care for that team to win again.

This a great dataset that we hope to extract more insights out of it in the future. It was also great working with teammates in Texas, California, Virginia and in our India offices to make this all happen.

If you have anything you are interested in seeing in the future on text analysis, drop us a line at info@SpringML.com or tweet us @springmlinc. We’d love to hear from you as well as any ideas for future text analysis series.